The starts turned out great.  I was so happy that my tomato seeds grew into tomato plants.  I have never grown tomatoes from seed with much success.  (No success.)  I rounded up the kids for a morning of planting in the garden.  You know, SOME GOOD OLD FASHIONED FAMILY FUN, yuck yuck?  The holes were dug, the plants placed.  Then came the task of getting them out of the plastic bags.  There was no saving the bags.  They had to be ripped off, and then the dirt didn’t hold together.  Plants broke and roots were ravaged.  For every plant that made it into the ground, five were ruined.

This gardening thing…DIE!  The plastic bag start thing…BURN.  Not recommended.  Ever.

I have mouth issues.  My tonsils get rocks in them.  I have caves in my tonsils where rock building creatures live.  It’s gross.  Pairing that with the bumps on my head, I am one step away from being the Sea Hag from Popeye.  Ewwwwwww!

In an effort to try to find a healthy balance of mouth bacteria I searched the internets for ideas.  I stumbled across some posts about oil pulling.  The list of benefits was long and luxurious, so I tried it.

I took a tablespoon of sunflower oil and put it in my mouth.   I swished and swished and swished.  Each post I read agreed that the time of swishing should be about 20 minutes.  I made it the first time about five minutes.  The oil mixed with my saliva forming some sort of bubbly grease blob in my mouth.  I fought the urge to vomit.  I fought the urge to spit.  I fought the urge to slap myself.  (ANOTHER blog induced suggestion had sucked me in!)  I ran to the bathroom and spit out the mess.  I rinsed my mouth out with water about 50 times and contemplated my next move.  Give up?  Try again?   I tried again and set the kitchen timer.   I washed dishes.  I mentally sang songs.  I told myself it wasn’t so bad.  I tried to keep the oil from touching my tongue too much.  I swished gently.  My face began to tremble.  My stomach turned.

When I had one minute left, Levi pooped his pants.  Oh sweet excuse!  I closed my eyes and spit out the mess again.  Seeing it would have ensured my throwing up.  I rinsed it down the drain and swished with water again.  After cleaning up Levi, I went to brush my teeth and get the last bit of oil out of my mouth.  I brushed, then smiled.  My gums were healthy pink, but my teeth were GLEAMING!  What the….?  Wow.

Well, maybe I COULD try it again, you know, before I have to go somewhere fancy and I need ultra bright teeth.

I won’t post any links for oil pulling.  Google it.  Try it.  Just don’t say I didn’t warn you.  It’s a very slimy sensation and holding it in the mouth for 20 minutes is really hard.  Blech.

The littlest Clements is my three year old son Levi.  Wee-bye Jon Cwements if you ask him.  For several weeks I have noticed that if there is anything in the house that has an exact duplicate (2 gallons of milk, a pair of boots, two plates of food) Levi will declare one good and one evil.

He asked for milk one morning and pointed to the gallon jug he wanted.  I told him he had to have milk out of the jug that was already open.  He shook his head and said, “No, that milk is eebol.  THAT milk is good.”

Another time he brought me his boots.  We had been working with him.  Putting shoes on the wrong way or the right way.  Recognizing right foot and left foot.  So he said, “Mommy, this is the right boot?”  I looked.  “Yes!  That is the right boot.  Good job!”  He held up the other boot.  “This is the eebol boot.”

I mentioned this to Jon a while back.  He became very concerned.  “Where would he learn that????”  Oh I don’t know….the television???  I think it’s pretty darn cute. 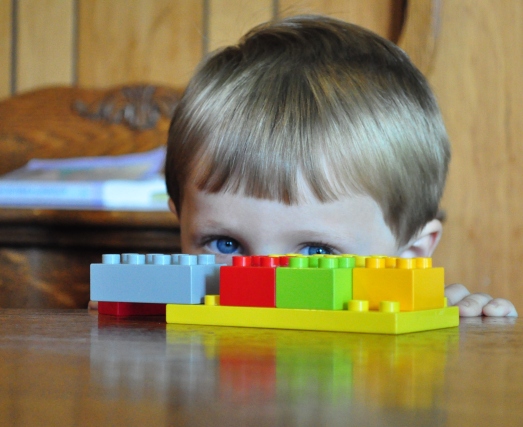 Pull up a chair and I’ll tell you a little bit about myself.

Go On…Grab Yourself a Button. ♥

Error: Twitter did not respond. Please wait a few minutes and refresh this page.